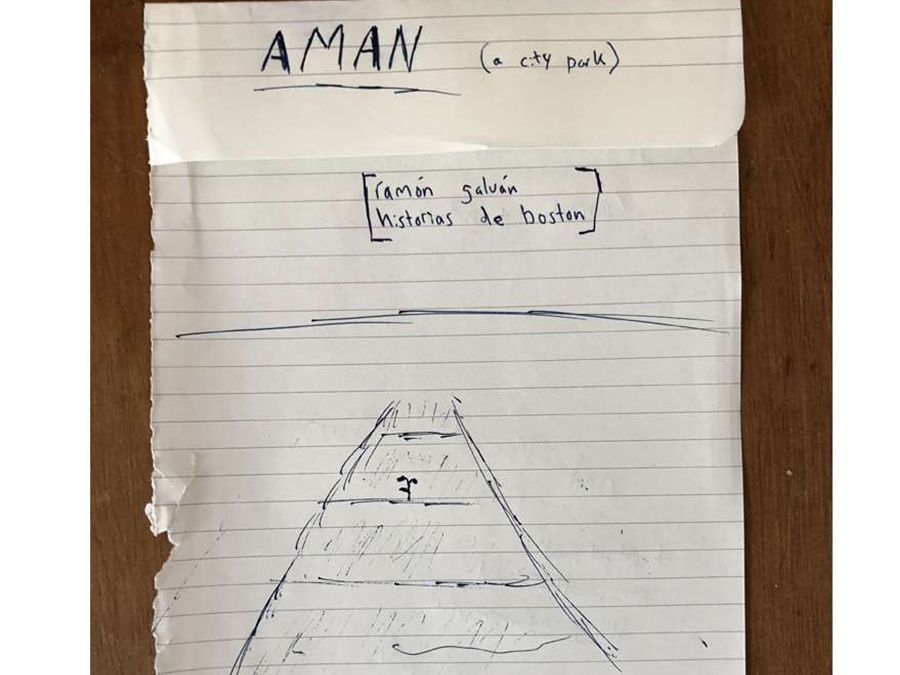 The ice breaker was scheduled for an hour. A whole hour.

I'm sure I'm not alone in my loathing of ice breakers. They quite literally feel cold, effete, an experience that, if any bonds come out of it, brings together a gaggle of groans and eye rolls. The ice breaker's project is not for the unimaginative: to catalyze social coming-togetherness out of some succinct personal story through what surely feels to be a damp activity. And now it's all online.

The ice breaker in question, a paraphrasing:

Take a piece of paper and pen. Draw your own national park. Name it with two letters from your first and last name. Don't forget to introduce yourself and your working group.

I grew up in Texas, and my parents grew up in Mexico. There's plenty shared between the two, plenty not shared. Language is complicated, the food related but like distant cousins, and the perceptions of each other is at times puzzling if not maddening. One is neither both nor just one, a little bit of both but not cleanly halved.

To born and bloom in Texas from Mexican roots isn't always sun-filled, this internecine existence not necessarily embraced (surely not understood) by those on each side of the border. On the surface one may overlook the subterranean tierra from which dueling existences rise.

In Texas one learns (I did) to ignore the subjugation of brown-skinned lives and heritage. One might go all of adolescence without reflection of or inquiry into identity and culture (I sure did). Whiteness (country cowboy whiteness, in my parts) suffocates Mexican Americanness. And México is surely not always a home to those with American births. (I won't yet get into the U.S/México soccer divide.)

So it's complicated, being a little bit of two things.

No surface prevails more during the many-hours drive from my small Texas town to my parents' Mexican town than that of concrete. Highways and speed bumps, toll booths and checkpoints.

From I-35 to the road along Monterrey's northwest-most edge where vast-spanning roofs like grey hilltops reach for the horizon. The rugged terrain left and right looks fated for some later day church, gas station, or new Houston highway. All made of concrete. And yet.

There's a relatively new concrete plant outside of Rioverde on the same carretera as the Coke factory. Around all sides of this two-lane stretch of industry rises leafy and unkempt shrubs and branches from unsown hills and valleys. Deeper into rural lands the grass is more howling, the weeds rhapsodic. What kind of world smashes these two forces together?

Sunned grey and shadowy green is an unnatural pairing, a contrast blurred by the quotidian; it's so natural, this cutting-through of land by humanity's prescriptive path. It seems where there are grey sweeps of concrete there's the shadow of viridescence. My lands of Texas and México share an espousal of concrete, with each side's sodden and verdant land razed, structure grown.

I've walked a lot as a newish resident of Boston. The early days were blinding, from the descending plane hovering above squint-inducing water to the glare of November's first wash of snow. I was distressed dumb by indiscernible subway lines, cafes, athwart intersections. My flat feet laced by cheap, worn Pumas were sailed into by sidewalks of bricks and concrete; some unfamiliar kind of soreness swallowed my toes. A semester of campus sidewalks made for more steps than a few number of years back in Texas. And yet.

The walks through Cambridge were slow-burns, free verse roaming, the end not about a knockout punch destination. By walking I lowered my attention to the land of soles; quite literally, I would helm my neck to hull to witness dainty and stepped-on sprouts of grass, weeds, or flowers emerging from sidewalks' borders and cracks. What an image for the Greeks, these stems breaking through human-made earth. I admired this natural tendency for recklessness.

My park would be about the stems that push through the cracks and edges of concrete sidewalks, paths, roads; the roots beneath those surfaces and the climb to sunlit space.

Concrete and weeds, grey and green. So much of my Mexican American sensibility looks like those little weeds surrounded by somebody else's surface.

Take a second to look at the little life that dares rebel against the concrete obelisk strangling its roots and obstructing its dirt. Born into struggle, those roots must be strong and those leaves succulent with stories.

Find one of those plants. Take a picture and make it your phone background.

Of course, not all of this was shared in the brief space mine during the ice breaker. Likely I stumbled over my ideas, mumbled out words, muted myself too soon. I wonder if anyone got what I said.

But the ice breaker got me to think, to visualize, and galvanize thoughts decades in the making. The best roots break hard ground. As do the best ice breakers.

Here's a blog about what I've been up to during my internship with USFWS so far! https://t.co/qgTLw9MkXA