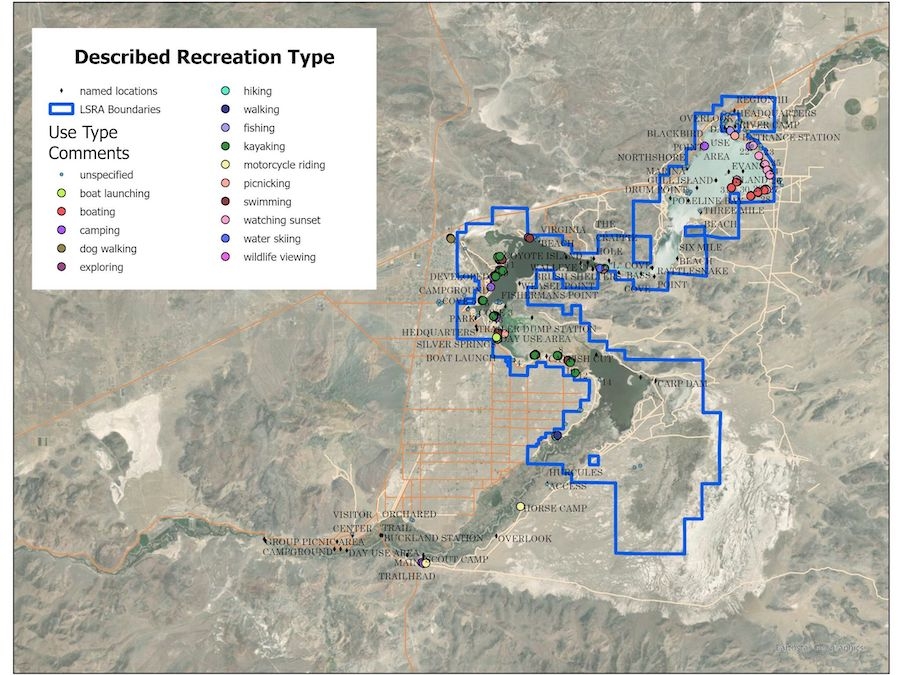 Lahontan: Access for All in the Advent of Climate Change


Lahontan State Recreation Area, a former brownfield site turned state park, is just one of many places around the country that is experiencing a changed landscape as global average temperatures rise. At Lahontan, climate change manifests most obviously as a significant reduction in the reservoir’s water levels. As seasonal water levels continue to change, the Nevada Division of State Parks has taken initiative in planning for a more stable future for Lahontan in the likely event of continued inconsistent water levels.
At the beginning of this year, the Nevada Division of State Parks conducted a public survey about recreation at Lahontan. I was tasked with organizing, analyzing and presenting the results of this survey to RTCA’s partners in order to eventually come up with a development plan for the park. Over one hundred people participated in the survey, the overwhelming majority of which had visited Lahontan prior. With a lot of thoughtful feedback about how Lahontan is currently used by visitors and how their experience can be improved, I got to work organizing the responses into what could be better turned into “results.”
By organizing the responses we received, we were able to get a clear picture of the visitors’ relationship with Lahontan. It was nice to see how many participants had genuine interest in being involved in Lahontan’s development plan. After reading the responses to the survey’s open ended questions – “How can your experience at Lahontan be improved?” and “If you had a magic wand, what would you wish for at Lahontan State Recreation Area?” – it seemed like the answers could not be quantified like many of the other ones. Instead, we charted the visitors’ hopes for Lahontan into different categories using a SWOT (strengths, weaknesses, opportunities, threats) format.
In the end, we turned people’s responses into charts that display how people recreate at Lahontan, an interactive map that shows where at Lahontan people like to recreate, and a table that maps the opportunities and challenges of Lahontan’s development plan going forward. The whole team was impressed with the responses, as people seemed to genuinely care about the future of Lahontan with full awareness of the changing water levels. It was amazing to see so many community members become part of the effort to improve their state park.
With the visitors’ responses, the Lahontan team was able to turn the peoples’ hopes for Lahontan into actionable goals for the development plan. I was unable to attend the workshop with RTCA and the Nevada Division of State Parks, but after seeing the outcome, I feel privileged to have helped bring the community’s voice to the table. After working so much with the survey data, I can’t wait to see these charts/maps/numbers turned into real improvements at Lahontan State Recreation Area!
Tweet