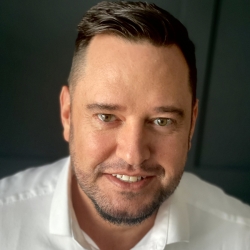 Email: This email address is being protected from spambots. You need JavaScript enabled to view it.
Phone: 317.410.7668
Twitter: @robertfanger

Robert brings more than 20 years of communications, marketing, design, and social media experience to Hispanic Access Foundation. Throughout his career, he has worked with numerous nonprofit, public-policy, and service-oriented organizations focused on serving underrepresented audiences. Robert has provided communications support to Hispanic Access Foundation since its founding in 2010, and he assumed a full-time role in September 2013.

Prior to joining Hispanic Access, Robert served as the president of Fanger Public Relations, where he led communications projects and campaigns for clients such as Hispanic CREO, GEO Foundation, Starfish Initiative, IUPUI School of Public Health, Center for Education Reform, and several others. Before launching his public relations firm, Robert served as the communications director for the Milton and Rose D. Friedman Foundation, which was created by the Nobel Laureate economist in 1996. His work appeared in many of the nation’s largest newspapers, including USA Today, Wall Street Journal, New York Times, Washington Post and Los Angeles Times, as well as on some of the largest broadcast programs including CNBC, Kudlow and Company and ABC’s 20/20.

Robert has also served as a communications director and consultant for many congressional and statewide political campaigns. In addition, he has taught college courses on internet/online communications and strategy. Robert is a graduate of the Pulliam School of Journalism at Franklin College and holds an M.B.A. from Purdue University.