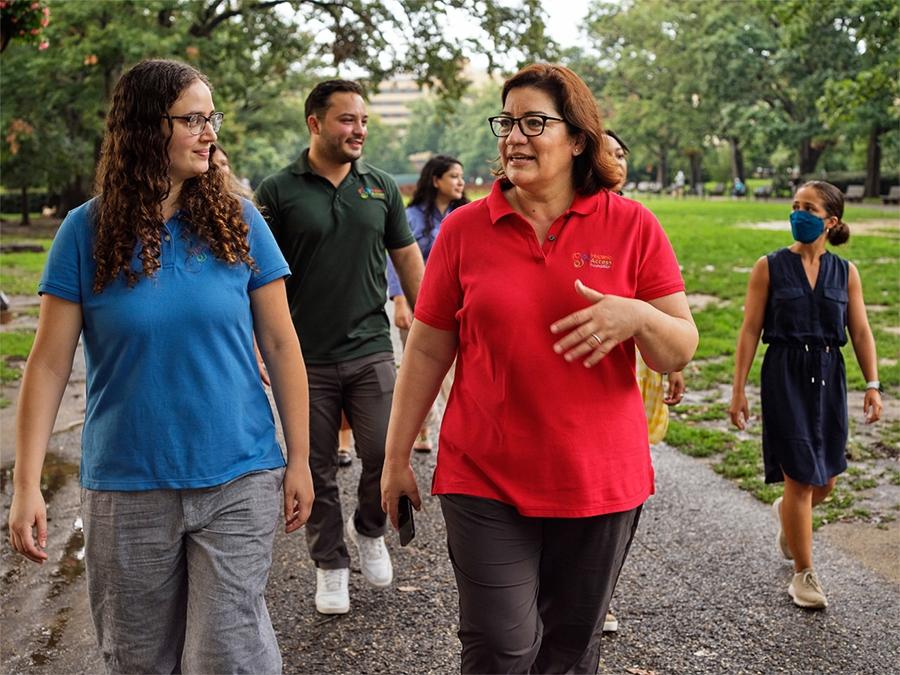 Apple is using $30 million to create expanded education programs for Hispanic and Black students as part of its  $100 million Racial Equity and Justice Initiative, the company announced Tuesday.

The tech giant said the projects include a Global Hispanic-Serving Institution (HSI) Equity Innovation Hub; more programming for community colleges and historically Black colleges and universities (HBCUs). There will be a new group for the Apple Entrepreneur Camp immersive tech lab for Latino founders and developers, as well as funding for leaders working toward advancing criminal justice and environmental reform.

Apple said 60% of undergraduate students at HSIs and HBCUs are Latino or Black, and its projects "will help equip the next generation of students and leaders to dismantle structures that perpetuate inequities and institutional racism." The company's racial equity initiative was launched in June 2020.

"The commitments we’re sharing will help the young leaders of today and tomorrow start new businesses, develop groundbreaking innovations and inspire countless others to join the fight for justice," Apple CEO Tim Cook said in a statement.

Apple’s efforts to increase access for underrepresented groups come as the company wrestles with deep racial disparities inside its own workforce.

Apple and the nation’s most highly valued tech companies reproduce the kind of disparities commonly found in more mature industries such as banking, according to a USA TODAY analysis of Census Bureau estimates of workforce demographics and employment records.

Black and Hispanic employees are far less likely to hold jobs as executives or managers or professionals and disproportionately work in lower-level and lower-paying positions. Of the nearly 52,000 Black people employed at Apple, Facebook, Google, Microsoft and Amazon, 64% are laborers, USA TODAY found.

At Apple, 80% of executives are white, and the top ranks include just one Black woman and two Hispanic men, according to federal data from 2018, the most recent the company has released. Only Amazon had a higher percentage of white executives.

Black men account for 1.6% and Black women 1.3% of Apple managers while Hispanic men make up less than 5% of managers and Hispanic women 2%.

Apple employs 177 Black women out of 30,745 workers in professional roles.

Last year, after Cook announced the $100 million racial justice fund to challenge “systemic barriers to opportunity and dignity,” a group of Black employees and their allies called on Apple to tear down those same barriers inside the company.

“As an industry leader, this company has a responsibility to be at the forefront of creating a workspace that functions properly for all its employees,” they wrote in an email to Cook.

According to the emails obtained by USA TODAY, Deirdre O'Brien, Apple’s senior vice president of retail and people, told the employees “change would not happen overnight,” but “Apple must do more to support our Black colleagues.”

Where the $30 million in new projects is going

Apple said it is launching a Global HSI Equity Innovation Hub in partnership with the California State University (CSU) system to help prepare Hispanic, Black and Asian American students to "become the innovators and creators of the future in STEM (science, technology, engineering and mathematics)."

The iPhone maker said its goal is to establish regional HSI Equity Innovation hubs at affiliate colleges and universities and through partnerships with national organizations.

California State University Northridge President Erika Beck said in a statement that she's thankful for Apple's support “as we aim to shift away from what students must do to be successful, to what our institutions must do to successfully serve the Latinx community and students from other underrepresented groups."

As for Apple's increased role in helping historically Black institutions, it will team up with Tennessee State University to expand to 11 more schools, including Clark Atlanta University, Florida A&M University and Texas Southern University, raising the number to 45 community coding centers and regional hubs on HBCU campuses nationwide.

In a statement, Tennessee State University President Glenda Baskin Glover said, "We’re proud of all that we’ve accomplished, and cannot wait to continue building this impactful initiative together as we create a more equitable future, open doors to new opportunities, and ensure our students have access to cutting-edge careers."

Apple said it will expand its Entrepreneur Camp program to its first group of Hispanic founders and developers who will work with Apple experts, engineers and leaders next year.

"Education, economic opportunity, and environmental justice are fundamental pillars to ensuring racial equity, and everyone has a role to play in this critical mission," Lisa Jackson, Apple’s vice president of Environment, Policy and Social Initiatives, said in a statement.

Apple pledged to help Black, Latino and Indigenous-led groups seeking environmental justice for communities most impacted by climate change and disparities. In a statement, Maite Arce, president and CEO of Hispanic Access Foundation, said the funding will "help us deepen community engagement, and ensure that we continue to bring more equitable solutions and opportunities to the forefront."

Apple said it plans to invest in several organizations promoting racial justice, including the Anti-Recidivism Coalition, the Council on Criminal Justice, Innocence Project, the Last Mile, Recidiviz, the Sentencing Project and the Vera Institute of Justice to work to prevent harsh sentencing for underrepresented groups in the criminal justice system.